#DeniedMyVote at the 2019 European Elections

You may have read about the news that many voters have been turned away from voting over here in the UK. I'd like to share a little analogy abut what happened, why it is so controversial and how it goes beyond voter suppression.

Imagine you're in California, and there's a political party whose only policy is to deport anyone born on the other side of the Mississippi. (That and being paid donations through PayPal that are all conveniently under the £500 limit allowed for anonymous donations. Totally not a big donation from one person that would normally need to be declared.)

A group of people living in California but born in the east are rightfully worried that this party might gain power. They are entitled to vote as citizens so they make sure they are correctly registered.

Voting day arrives and the process goes smoothly for Californians. Voters from out-of-state, however, find they can't vote.

Some are told they should have filled out a special form but were never told that was needed. Some did fill in the form but it got lost. Some did everything right but the people running the vote didn't know this group was entitled to vote and just struck them off the register.

Election day passed and a significant number of people didn't get to vote. Those people probably wouldn't have voted for the deportation party so the situation may might end up unfairly inflating their share. 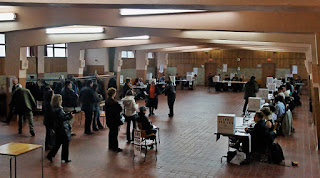 (Sounds ridiculous? This is basically what's going on here. Only difference is our Mississippi River is a bit wider and we call ours The English Channel and The North Sea.)

Just to round out the story, on the day the news of voter suppression breaks, a senior politician chooses this day (quite coincidentally) to announce their resignation. News reports quickly start paying attention to this new distraction and soon forget about the dodgy funding and voter suppression.